Radiography is concerned with the use of x-rays to generate static, two-dimensional images. The patient is positioned between an x-ray source and a receptor, closer to the receptor. X-rays generated by the source pass through the patient’s body, being absorbed (or attenuated) to different degrees by bone, soft tissue, fat and air. The x-rays that pass completely through the body strike the receptor and darken photographic film, a key discovery by Wilhelm Roentgen that led directly to the investigation and development of imaging technology. Today, instead of directly exposing photographic film, digital x-ray detectors can be used to receive the transmitted x-rays and produce the corresponding image on a computer screen or print to a laser film printer. The final image is dependent on the detector’s sensitivity to x-rays, contrast resolution (how many attenuation values can be represented) and spatial resolution (how fine of detail can be recorded). The display medium (i.e. film printer or digital screen) also affects what can be viewed in the radiograph. Variations include the injection of contrast material that absorbs x-rays more efficiently (ex. bound iodine) into the circulatory area of interest through a catheter.

Compared to other imaging techniques, radiographs have low cost so they are commonly used in hospitals, clinics and doctors’ offices. The disadvantage is that radiographs are relatively low contrast, two-dimensional images revealing less information than some of the more sophisticated imaging techniques. In spite of the newer technologies however, radiography and its cousin fluoroscopy are still responsible for the majority of imaging ordered in many facilities. Radiographs are most commonly taken for diagnosis of problems in the bones, joints and chest. Mammography is a significant subspecialty, including radiographic technology developed specifically for the screening and diagnosis of breast cancer.

Another disadvantage of radiography is that x-rays are one form of ionizing radiation. High energy rays can separate electrons from atoms, ionizing them. Ionizing radiation is harmful to living organisms, at low levels causing tumors, cancers and damage to DNA, and at high levels causing skin burn and radiation sickness. However, the exposure level produced by single radiographs is relatively low because radiographs are quick to produce.

Fluoroscopy shares similarities with radiography, because it also involves positioning the patient between an x-ray source and a receptor. In this technique however, real-time moving images are acquired. The x-rays transmitted through the patient’s body strike a surface and cause fluorescence. Since the 1950s, x-ray image intensifiers have been used to intensify the fluorescence for easier observation; today these are connected directly to CCD digital cameras and the image is displayed on a screen. Expensive flat-panel x-ray detectors are replacing image intensifiers in some settings. As with radiographs, fluoroscopy may be aided by the introduction of a contrast material into the bodily system of interest.

Fluoroscopy is used both for diagnostic functions and guiding procedures – it is an integral part of interventional radiology. Procedures that commonly rely on the real-time moving images provided by a fluoroscope include investigation of the gastrointestinal tract, cardiac catheterization, IV catheter insertion, orthopedic surgery, urological surgery and implantation of pacemakers or similar devices.

The use of x-rays makes ionizing radiation a concern in fluoroscopy like in radiography. However, because fluoroscopy is used to view movement and guide procedures in real-time, rather than single image captures, patient exposure time is much longer than for radiographs. There is typically a moderate x-ray exposure involved, though the exposure will vary significantly depending on the length of the viewing or procedure needed. In rare cases, where a long procedure is unavoidable and the assistance of fluoroscopic images necessary, the result can be radiation burns.

Room size and Functional Considerations
Based on a research study* that included 19 facilities throughout the United States with a total of 79 radiography/fluoroscopy imaging exam rooms,
79 rooms/19 facilities = 4.158 rooms/facility on average 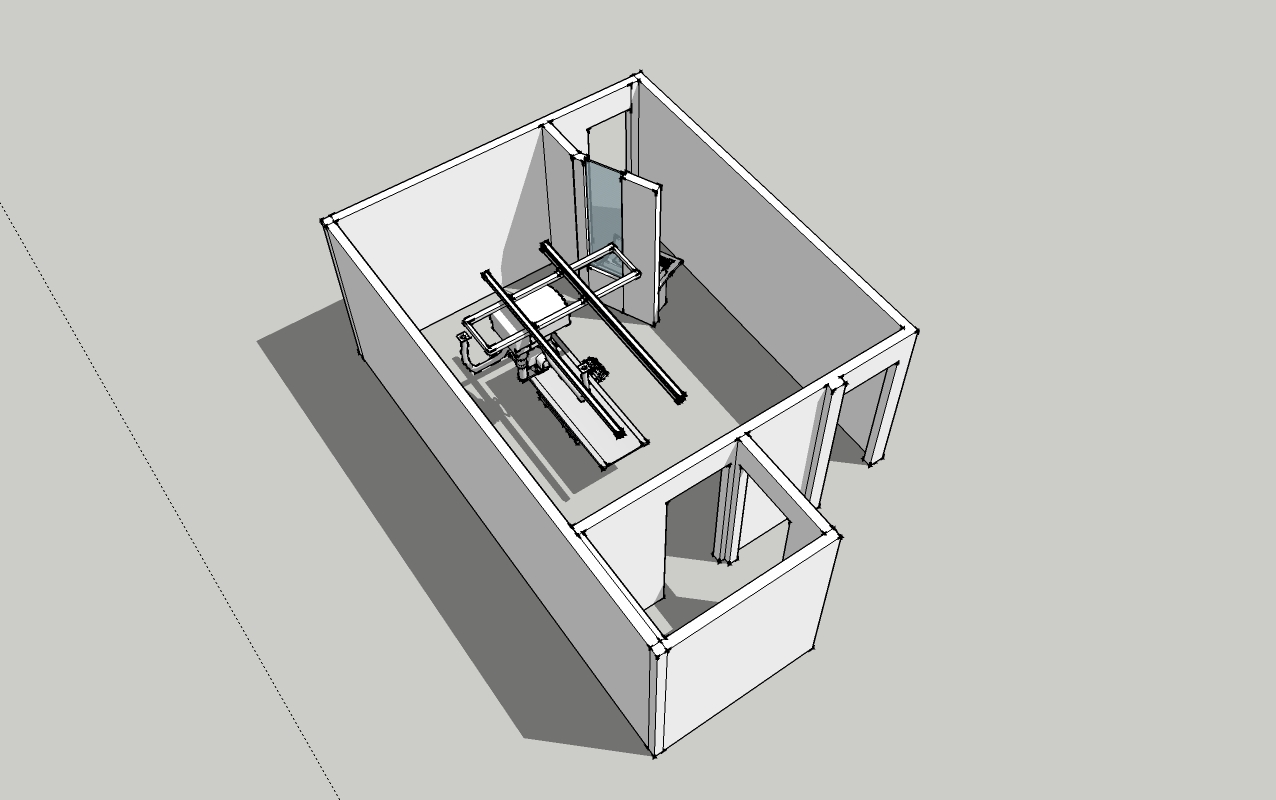 The GE Radiographic Flouroscopic Room diagrams recommend 296 square feet (including the control room, excluding the restroom), a 9' 6" ceiling height, a control room with a 7' high lead glass viewing window, and a 44" wide, 83" height door frame to accommodate the Precision 500D with Magic PC. 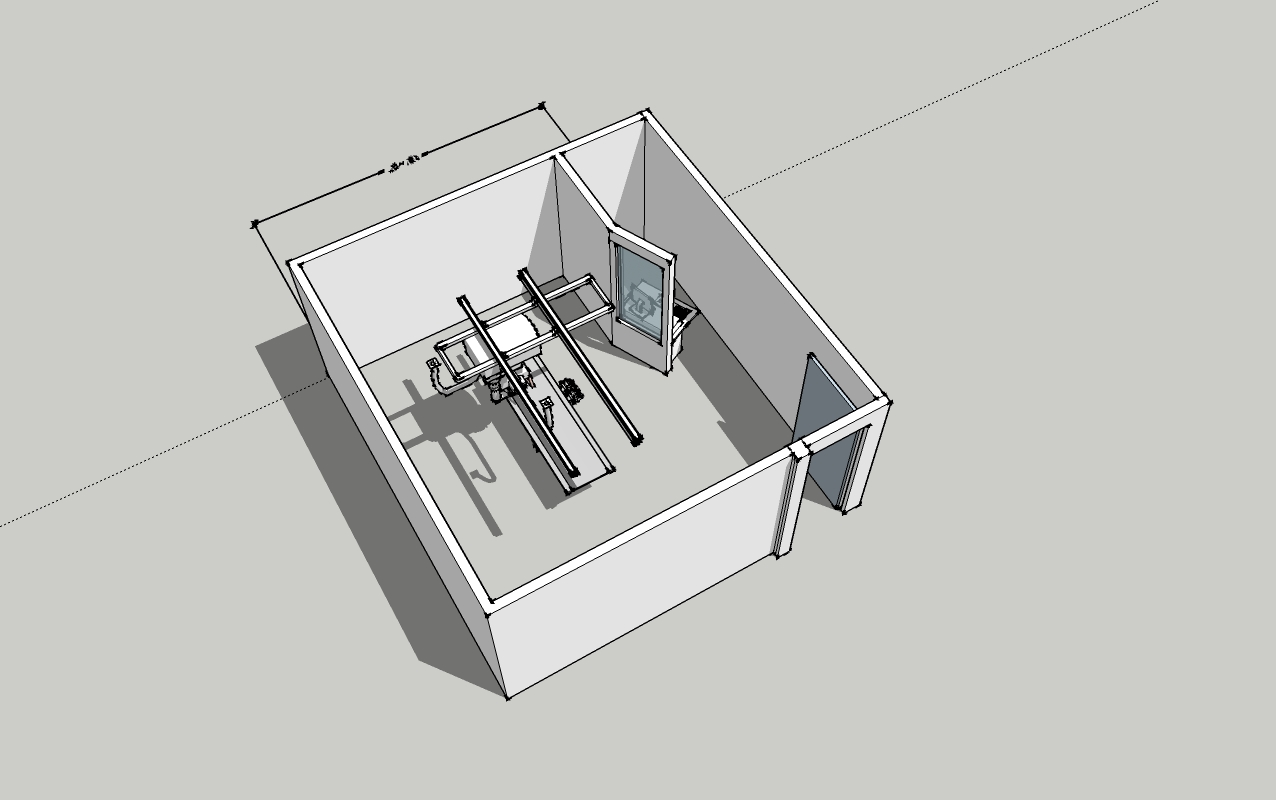 Patient access and visualization of patients during an exam are major functional issues in the design of radiographic/fluoroscopic rooms.

with the aid of graduate student investigators,