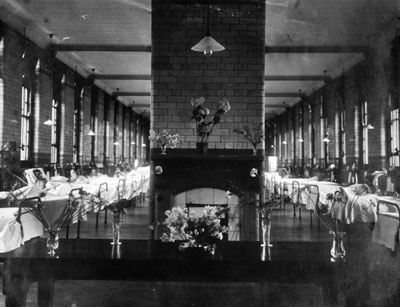 
Hospitals were historically set up in wards with 20-40 patients. Private or even semi-private rooms were only for those who could pay.


Single occupancy rooms have many benefits which have justified the transition to their universal use. Single rooms are easier to clean and promote improved hand hygiene by the staff decreasing overall infections. Bathrooms are especially hard to clean and are a common place for infections. Private rooms with their own bathrooms decrease possible infection transfers in this area. Patient flow is increased because every bed is usable, decreasing the total number of needed beds. With multi-bed rooms, some beds are left empty due to gender restrictions. By separating each patient, medication distribution is much more accurate decreasing the likelihood that medicine is given to the wrong person. The increased privacy created by single rooms decreases patients reluctance to disclose sensitive information and allows for a greater sensitivity to information transfer in general between the patient and staff. This privacy lowers the overall noise surrounding the patient lowering stress and increases the ability of the patient to rest and thereby get better.

Disadvantages of single occupancy rooms also exist. The increase in square footage means additional walking for staff. This may mean additional design features such as satellite workstations and different supply distribution. Single occupancy rooms also mean that there is no one in the room to summon help like there would be in a multi-occupancy room; however, single rooms increase the convenience for family to stay with patients, offsetting this disadvantage. Also, some patients may prefer to have a roommate, especially if they are unlikely to have family visit or if they are likely to have an extended stay. This possibility may require that some double rooms be allowed. Cost is another issue. Single rooms have between a 5%-10% premium in capital costs. Also, if more than one occupancy type is offered, a surcharge can be placed on the single rooms. If only single rooms are offered, that surcharge will disappear unless overall prices are increased.