From the perspectives of both physicians and patients, studies have indicated that the U.S. health care
system need to do much better in achieving goals and increasing their standards compared to other countries.
The following issues can potentially improve the U.S. health care industry if addressed properly.

Quality:
• The indicators of quality were grouped into four categories: effective care, safe care, coordinated
care, and patient-centered care. Compared with the other six countries, the U.S. fares best on provision
and receipt of preventive and patient-centered care. However, its low scores on chronic care management
and safe, coordinated care pull its overall quality score down. Other countries are further along than the
U.S. in using information technology and managing chronic conditions. Information systems in countries
like Australia, New Zealand, and the U.K. enhance the ability of physicians to identify and monitor
patients with chronic conditions [4].

Access:
• Not surprisingly—given the absence of universal coverage—people in the U.S. go without
needed health care because of cost more often than people do in the other countries. Americans with
health problems were the most likely to say they had access issues related to cost, but if insured, patients in
the U.S. have rapid access to specialized health care services. In other countries, like the U.K. and Canada,
patients have little to no financial burden, but experience wait times for such specialized services. There is
a frequent misperception that such tradeoffs are inevitable; but patients in the Netherlands and Germany
have quick access to specialty services and face little out-of-pocket costs. Canada, Australia, and the U.S.
rank lowest on overall accessibility of appointments with primary care physicians [4].

Efficiency:
• On indicators of efficiency, the U.S. ranks last among the seven countries, with the U.K. and
Australia ranking first and second, respectively. The U.S. has poor performance on measures of national
health expenditures and administrative costs as well as on measures of the use of information technology,
rehospitalization, and duplicative medical testing. Sicker survey respondents in Germany and the
Netherlands are less likely to visit the emergency room for a condition that could have been treated by a
regular doctor, had one been available [4].

Equity:
• The U.S. ranks a clear last on nearly all measures of equity. Americans with below-average incomes
were much more likely than their counterparts in other countries to report not visiting a physician when
sick, not getting a recommended test, treatment, or follow-up care, not filling a prescription, or not seeing
a dentist when needed because of costs. On each of these indicators, nearly half of lower-income adults in
the U.S. said they went without needed care because of costs in the past year [4].

Long, healthy, and productive lives:
• The U.S. ranks last overall with poor scores on all three indicators
of long, healthy, and productive lives. The U.S. and U.K. had much higher death rates in 2003 from
conditions amenable to medical care than some of the other countries, e.g., rates 25 percent to 50 percent
higher than Canada and Australia. Overall, Australia ranks highest on healthy lives, scoring in the top
three on all of the indicators [4]. 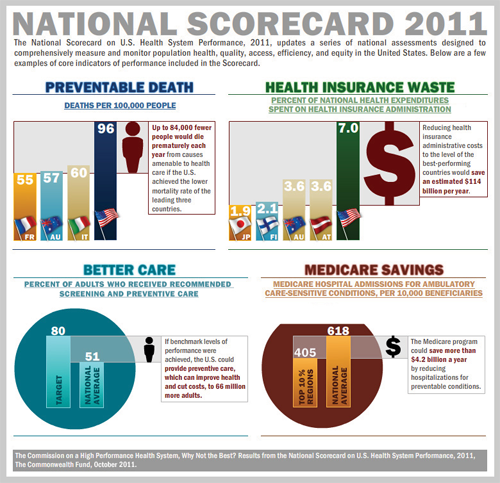