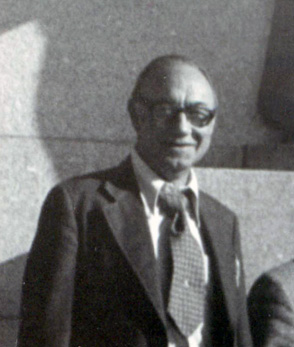 George Agron, FAIA was one of the unsung leaders of healthcare planning and design during the period from 1960 through the 1980’s. This was the period of rapid innovation following the boom times of the Hill-Burton funding during the 1950’s and 60’s. Agron began his professional career in Los Angeles in 1937 after attending UCLA. He became a partner of Gregory Ain and later served with Berla and Abel in Washington DC. before locating to the San Francisco Bay Area in 1946. He joined Stone Marraccini and Patterson (SMP) in 1952 and was elected to the Board of Directors in 1958. Agron was active in the American Institute of Architects (AIA) and served at served as President of the San Francisco chapter of the AIA in 1969. In 1976 he was elected to Fellowship in the American Institute of Architects. George retired from SMP in 1980. George Agron passed away on January 9, 1985

George had an uncanny ability to search out new ideas. While other architects occasionally do this, George would take new ideas and improve of them. He saw how a short span building system in Uppsala, Sweden could be adapted to a long span, precast building system for the Health Sciences Center in Calgary, Alberta. Likewise, he understood the principals of the School Construction System Development (SCSD) program in the United States could be combined with design principals employed by the Greenwich Hospital in Greenwich, England to develop the VA Integrated Building System (IBS). To do this, he teamed SMP with Building Systems Development (BSD) developers of the SCSD program for schools. The VA, working with SMP and BSD developed the first IBS hospital, a 500 bed Jerry Pettis (?) Memorial Hospital in Loma Linda, California. Since then, the IBS technology has been used in numerous hospitals in the United States, both by the VA and in the private sector. After almost 30 years the IBS remains the state-of-the-art system for achieving flexibility and improved performance in hospital design.

Within SMP, George created a Programming and Research group that ranged over the years from 10-20 individuals with backgrounds ranging from architecture to medicine to music. Early use of the computer and exploring its potential to analyze functionality and space became a strong theme. The group routinely employed scenario planning and computer simulation in assessing facility need, one of the first architectural or consulting firms in the country to use these valuable tools.

The SMP Programming and Research group under Agron’s support and guidance pioneered the use of workload based space programming which was later used while working with CHI Systems, Ann Arbor, Michigan, in a three year study for the Department of Health and Human Services to develop a model for proposed health facility Certificate of Need review by communities, states and the federal government. Workload based programming has subsequently become the national standard for health facility programming. Other research studies include development of a model for analyzing movement systems in hospital in order to anticipate the future operational cost through a large simulate model. The firm, working with the VA, also developed a series of solutions to eliminate or minimize damage to medical and other equipment in the event of an earthquake.


Tib: This is great material that is not available anywhere else. Thanks for submitting! I hope you will add descriptions and biographies of some others you may have known. Kirk