Terminology
Net Square Feet (NSF): The space within the walls of a room or the usable floor area assigned to a function in an open area e.g, cubicles or workstations. The space includes casework, fixtures and door swings but does not include wall thicknesses. 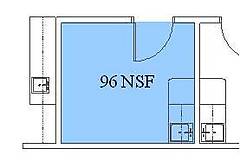 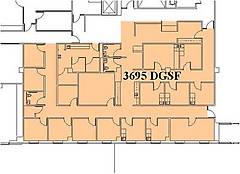 Building Gross Square Feet (BGSF): the total area of the facility including outside walls, mechanical spaces and canopies. Net to Gross Factor or Grossing Factor: a multiplication factor applied to space to increase the allotment to accommodate elements not in the base number. A grossing factor is applied to space lists on Net Square feet to take into account internal circulation and walls to give Departmental Gross Square Feet. Another factor is used to increase DGSF to Building Gross Square Feet (BGSF) and estimate the amount required for major vertical circulation, shafts and building circulation. As a rule of thumb, building gross is approximately twice the amount of net area in a hospital. As part of a recent study conducted by Dave Allison at Clemson University and Kirk Hamilton at Texas A&M eighteen emergency services departments were included in the initial sample, ranging in size from 7,800 to 40,800 departmental gross square feet. Most of the samples were community hospital facilities. There were at least two teaching hospitals that could be identified. It is not know if any of the facilities were classified as a Level 1 trauma service. All of the designs, with the exception of two facilities, could be defined as “ballroom” layouts, with exam rooms wrapped around a single, or multiple, staff work stations. Two of the designs incorporated parallel corridors in a design sometimes described as “fingers.” The mean ratio of net square feet to departmental gross was 1.58, with a standard deviation of .11.

Of particular interest in this initial sample is the difference in the ratio between large and small emergency facilities. The ratio for the nine emergency services smaller that 20,000 DGSF was 1.53 while the ratio for the nine larger ER’s was 1.62. This may be explained by two factors. First, the waiting area in the smaller units contributed to a larger proportion of the total area than for larger emergency facilities. Since all of the waiting area was counted as net square feet, this contributed to a portion of the variance. What appears to be more significant is the developed of clusters, or “pods,” of special components in the larger design, resulting in small groupings of treatment area with significant circulation components. This is a significant issue, since emergency facilities have been increasing in size over the past twenty years and a result of volume and service growth. If a larger sample support this finding, the development of a “sliding” scale may be appropriate for the net to gross ratio based on the overall size, or volume, of the unit. Unfortunately, there were no “perimeter” corridor configurations in this initial sample. This is a model, which is gaining interest nationally, presents interesting challenges in the measurement of a DGSF ratio, particularly to the determination of what components of the “inner-core” staff work area should be credited as net versus gross. Hopefully future samples will include this design type. The mean result of 1.58 and 1.63 for larger units is notably close to the previous 1.6 rule-of-thumb ration used by many practitioners.