Cancer is a disease that lives within each and every one of us, but it is not just a single disease. There are over 100 forms of cancer and most develop their name from the organ or type of cell that the cancer is found in - a basic example of this would be breast cancer because the orgin of the cancer is found in the breast. Cancer types can be grouped into broader categories. The main categories of cancer include: carcinoma, sarcoma, leukemia, lymphoma and myeloma, and central nervous cancers.

All cancers are formed in cells. Understanding cancer is all about knowing what happens when the humans normal cells are transformed into cancerous cells. Considering the body is made up of many types of cells and they all tend to grow and divide in a controlled manner to help keep the body healthy. If the cells become old or damaged, they end up dieing off and then replaced with new cells. When the process of replacing the damaged cells goes wrong a cell might not die when it should and then the body creates new cells although the body does not need them. These extra cells can form a mass for tissue called a tumor. But not all tumors are cancerous which places them into two separate categories, benign and malignant. Benign tumors are not cancerous ones and they can be removed with no scare of having them come back. Malignant tumors on the other hand are cancerous and there are a number of different options for treatment including: radiation therapy, chemotherapy, and surgery. 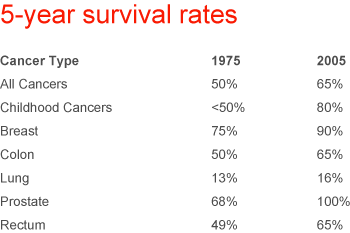 From 1999 to 2006 the overall new diagnoses in the United States decreased about 1 percent and the number of deaths during this period decreased an overall percentage of 1.6 percent.In 2009 there were 1,479.350 new cancer cases diagnosed and 562,340 deaths which in both categories was a drop from from the previous year. Of the new diagnoses and deaths found in the United States every year cancers found in the bladder, brain, breast, colon, kidney, liver, lung, ovary, pancreas, prostate stomach, thyroid, and uterus are the most common found. Breaking the diagnoses into groups we have found that cancer death rates are higher in black men and women. Statistics have shown that lung, prostate, and colorectal cancers cause the highest number of deaths in men and breast, lung, and colorectal cancers cause the highest death rates in women with breast cancer being the number one cause of cancer deaths.

The prognosis of a patient is typically based on a number of factors which are carefully considered including the prognosis and deaths. In addition to these the survival rate, 5-year survival rate, and recurrence free survival rates help play a major role in the prognosis of the patient. Most times doctors use statistics based on groups of people whom have had similar cases to the patient. With this in mind most patients are paired with doctors which have a familiar background in the type of cancer in which the patient has. There are several reasons for this, a couple of them being the that the doctor has a good understanding of how that specific cancer effects the body, what kind of treatments may be best in eliminating the cancer and tumors, and if there might be a recurrence then the doctor will have good idea of possibilities might be best for the patients future.

Benign tumors - Non cancerous tumors that are often removed and quite often do not return. The cells of these tumors do not spread to other parts of the body.
Biological therapy - A type of therapy that stimulates the immune system to help fight cancer. Biological therapy also may be used to lessen side effects of treatment. It may be referred to as immunotherapy.
Biopsy - Removal of cells from the body to see if they are cancerous. A doctor examines the cells under a microscope, comparing them to normal cells.
Bone scan - Bone scans use nuclear medicine imaging to spot cancer in the bone. A radioactive substance is injected into a vein and is attracted to areas of cancer, and then the radioactivity is recorded by a special camera as a picture. There is a phenomenon called "normal physiological uptake," which may vary from individual to individual. Also, previous trauma or fractures can elicit a positive signal as well.
Brachytherapy - Brachytherapy is radiation treatment inside the body, placed as close to the cancer as possible.

Carcinogen - A carcinogen is anything that causes cancer. Carcinogens can be physical, chemical, or viral, but many are not known.
Carcinoma - cancer that begins in the skin or in tissues that line or cover internal organs.
Carcinoma in situ - A cancer that has not spread to other parts of the body or invaded nearby tissue. Carcinoma in situ, an early form of cancer, is highly curable.
Central nervous system cancers - cancers that begin in the tissues of the brain and spinal cord.
Chemotherapy - The use of drugs to destroy cancer cells. A person on chemotherapy may take one drug or a combination of drugs. Most often these drugs are given by vein using intravenous (IV) infusion. Some can be taken by mouth or given in a shot.
Combination chemotherapy - Using more than one anticancer medication together, with the goal of destroying more cancer cells.

Diagnosis - Identification of a condition or disease based on the signs and symptoms, laboratory tests, procedures, history, and physical examination of the patient.

Fatigue - Fatigue means feeling tired, weak, sleepy, forgetful, or worn out, and having no energy to go about your daily routine. Fatigue is commonly caused by cancer treatments, but can also result from the disease itself. Fatigue is also often present in patients with anemia.

Grade - Grade is the measurement of a cancer, reflecting how abnormal the cells look under a microscope.

Immunotherapy - A type of therapy that stimulates the immune system to help fight cancer. Immunotherapy may also be used to lessen side effects of treatment. Immunotherapy is sometimes referred to as biological therapy.

Leukemia - cancer that starts in blood-forming tissue such as the bone marrow and causes large numbers of abnormal blood cells to be produced and enter the blood.
Lymphoma and myeloma - cancers that begin in the cells of the immune system
Lymph nodes - Lymph nodes are small, oval glands found throughout the body. They act as filters and fight infection. Cancer cells often spread to other parts of the body through the lymphatic system.

Malignant tumors - Cancerous tumors which can attack nearby tissue and spread to other parts of the body.
Mastectomy - Surgical removal of breast tissue. There are several different types of mastectomies: modified radical mastectomy, partial mastectomy, simple mastectomy, and prophylactic mastectomy.
Metastasis - the spread of cancer from one part of the body to another.
MRI - Magnetic resonance imaging, or MRI, creates three-dimensional sectional images similar to CT scanning. An MRI differs from a CT scan in that it does not use ionizing radiation, but instead uses a powerful magnet to transmit radio waves through the body. Images then appear on a computer screen. Doctors use MRI to diagnose and stage cancer. A contrast medium may be used in MRI imaging to enhance the picture.

Prognosis - A prediction of the likely outcome of a disease based on the current health of the patient and the usual course of the disease.

Radiation - The use of radioactive substances for the diagnosis or treatment of diseases.
Radiographs - Also known as x-ray studies, radiographs are used to examine bones and soft tissues of the body. A radiograph image shows all structures superimposed on one another. A doctor may request x-rays of many parts of the body.
Recurrence - The return of a primary cancer that previously showed no signs of activity.
Relapse - The recurrence of disease after an apparent recovery.

Toxicity - Toxicity refers to side effects that are related to the dose of a drug.
Tumor - A collection of cells that appears as a lump, mass, or swelling.