The beginning of the 20th century found psychiatrists at a loss. The beautiful and extremely expensive asylums that were built in the 19th century were all but full. And the patients were not improving at a rate predicted seventy five years ago. Many more patients were being admitted then were being released. Architecture had clearly failed to be the one cure to help patients. However most of the 300 elaborate asylums that were constructed in the 19th century were standing and were being used. The problem was space, most pre Civil War asylums were designed to house around 250 patients. The late 19th century asylums were designed to house around 650 patients, both numbers were far to small to cope with the demand. Issues with asylums went beyond over-crowding, with so many patients and shrinking state budgets it became more and more difficult to properly take care of all the patients. Additional cuts in funding during periods of wartime and economic downturns led to starvation amongst patients. Over-crowding led to deteriorated living conditions, there simply was not enough staff and money to deal with the massive amount of patients. The buildings themselves however soldiered on, with little funding there was no money for additions or sometimes even upkeep, the conditions of asylums themselves began to deteriorate as well.

With problems such as over-crowding and lack of funds as well as the deteriorating conditions led to efforts to deinstitutionalize the typical asylum. Efforts began to be made in the 1920's to break up the typical asylum and move some of the patients to less restrictive and regimented facilities in the community. This trend bean to become more popular after World War II. By the 1960's efforts were in full swing to fully depopulate the typical 19th century asylum. The discovery and classification of mental illnesses allowed asylum authorities to carefully segregate various patients. As a direct result of these aggregations only the most violent patients would need to be incarcerated. The rest could be moved out of a typical asylum The post World War II period also saw the rise of specialized treatment facilities and a rise in criminals being sent to asylums. Both of these factors contributed to the downfall of the typical 19th century asylum. By this time many original asylums were over one hundred years old. They could no longer effectively house any patients. Their upkeep was a nightmare. As a result most of the majestic 19th century asylums were either abandoned or torn down. As I mentioned in the 19th century portion, some of these buildings are standing today as the are Historic Landmarks, however none are in use. 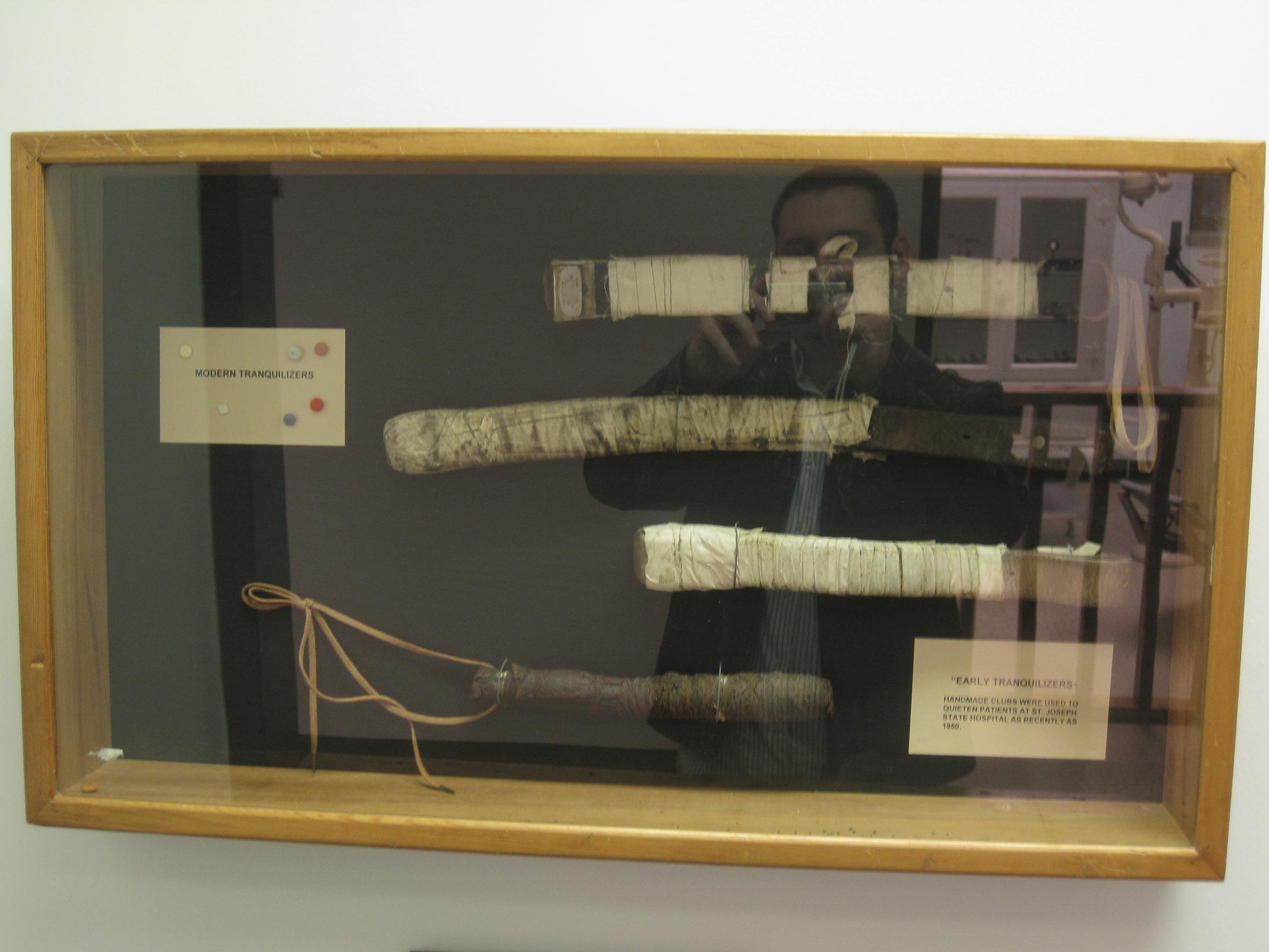 The 20th century was the golden age of discovery for mental healthcare. Many different types of mental illnesses were discovered. Between the 1920's and the 1960's virtually all modern mental illnesses were identified. With identification came possible cures. As I described before some early 20th century doctors believed that mental illness was caused by infection and tried to remove "infections" teeth or limbs. This was not a wide spread practice. Most doctors at the dawn of the of the century chose instead to give the majority of their patients more freedom, Restraints became more and more uncommon. Single padded isolation rooms replaced previously used dark rooms were patients were fully restrained. Many new practices were invented during
the early to mid 20th century. The first new practice was insulin shock 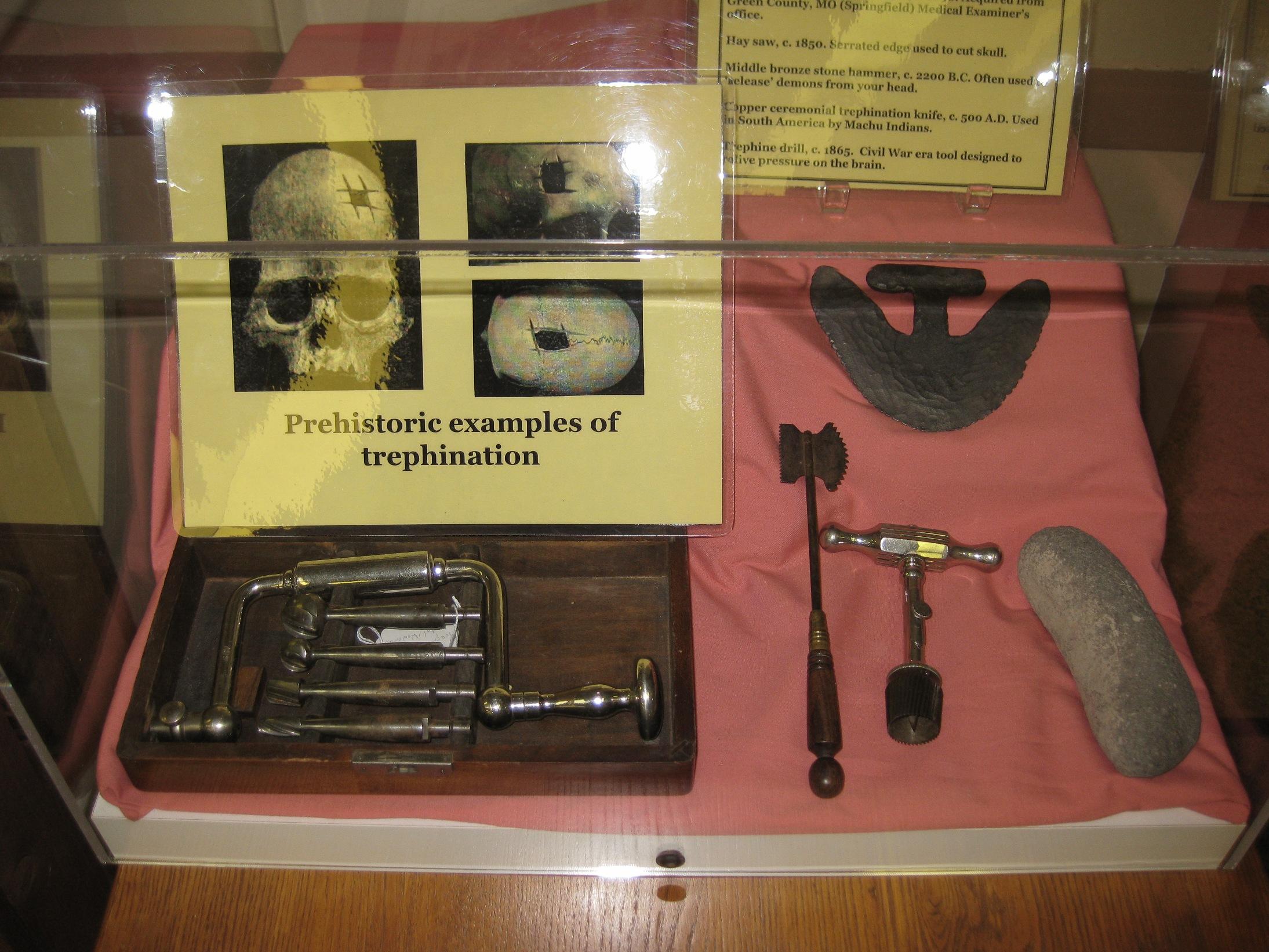 therapy, this new cure was developed in 1933. About the same time cardiazol shock therapy was developed. It worked on a similar principle. Insulin shock therapy was discontinued in the 1970's and cardiazol was prohibited by the FDA in 1982. In the late 1930's electroconvulsive therapy also known as electroshock was invented. This method of treatment gained widespread use after World War II. While this method of treatment can have unhealthy side effects its remains in widespread use around the world today. It is estimated that around 1 million people are treated with electroshock every year. Yet another method of treatment was lobotomy.This procedure was used to treat the brains frontal lobes. It was a procedure that did not require a full surgical suite and could be performed in as little as fifteen minutes. Lobotomies were widely performed during the 1940's and 1950's after this they began to began as cruel and barbaric and were discontinued. 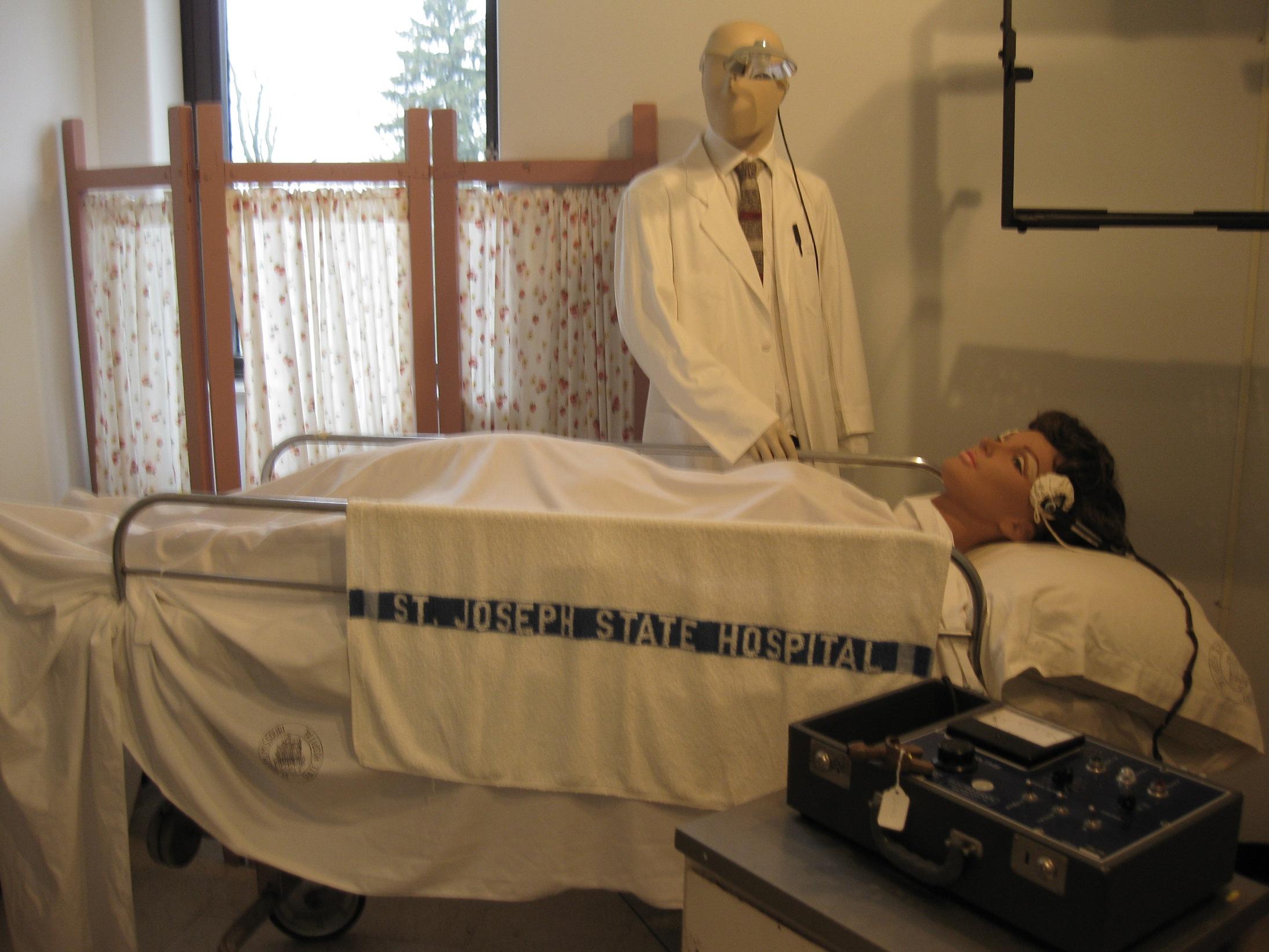 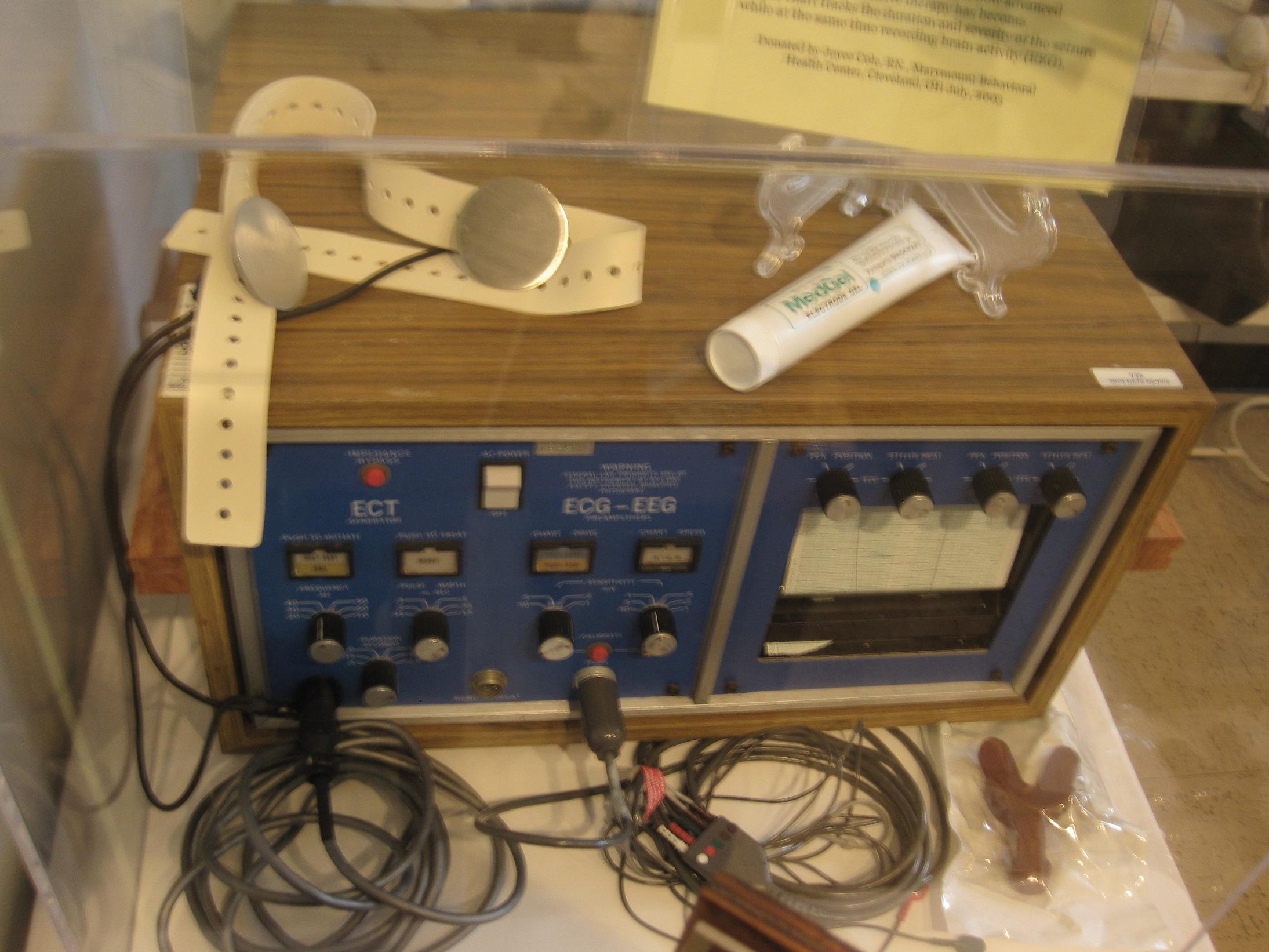 A new phase of mental healthcare building was evident during the 1960's and 1970's. There were numerous reasons for this boom in facility construction. The most important reason was the obvious complete deterioration of mental asylums constructed during the previous century. These facilities were not designed nor could support the modern patient. Another obvious reason was the changing nature of mental healthcare. Patients were no longer treated as they were in years past. Their treatment schedules and goals were different. The activities that a mental institution would have to support were radically different from years past. This was due to the changing views that society had regarding people with mental disorders. Due to specialization and much more successful treatment using drugs mental healthcare facilities began to have a very focused portion of the population.

Most modern mental healthcare facilities strove to achieve goals similar to their 19th century fore bearers. All facilities tried to cure their patients through the most modern methods available. In the 20th century these methods were radically different. The obvious differences lay in the use of drugs to treat and attempt to cure various disorders. This led to changes in the design and construction of the facilities. Patients were afforded more and more freedom. Very few patients would now have to be kept under maximum security confinement. This mean that many more open interaction areas would have to be planned. Patient rooms also hanged. From their prison like decor of the early 20th century facilities became much more home like as the 20th century progressed. At the same time advances made furniture lighter and less lethal. The same could be said of bathroom fixtures and decor. Progress was made to make all aspects of mental healthcare facilities safer and more user friendly for both patients and staff. The previously used solitary confinement areas became areas of personal refuge. When a patient wanted to escape the harshness of everyday life they could retreat to these areas and be alone.
Another change that occurred was the dining facilities. Previously patients grew and cooked their own food. Meals were eaten in small and segregated facilities, each small dining room was placed in a separate ward or one per cottage. Modern dining facilities avoided such wasteful measures. Since most patients were much calmer and posed no significant threat to themselves or others it was perfectly acceptable to have cafeteria style dining facilities. This radically cut down on both construction costs and food costs. For more violent patients meals would be served in their personal quarters.
Another change that occurred was due to the attitude of society toward mental healthcare patients. Previously few areas were open to family members. Patients were simply dropped off at a facility and left there. Or in the case that they were cured they were merely picked up. Family members were allowed to visit a very small portion of the 19th century asylum. Most rooms that were open to the public were meticulously maintained, to give off the impression that the rest of the facility was similar. This was almost never the case. Most individual patient rooms were not kept up to the same standard as were the publicly viewed areas. As funds shrank patient areas became more and more unsanitary. At a low point asylums in the 20th century began to resemble their forebears of the 18th and earlier centuries. All of this changed when mental healthcare institutions began to empty out in the 1960's and 1970's. Patient populations decreased and funding per patient increased. All parts of a mental healthcare facility now adhere to strict guidelines. Although patients in mental healthcare facilities are not required to have as much space as some patients in OCU or regular hospital all facilities are well maintained. The family has began to play a new role in mental healthcare. Family visits are much more frequent due to a changing outlook of society upon the mentally ill. All mental healthcare facilities now strive to make their most public spaces much more friendly and less institutional. The same could be said about the general decor of the facility. Many patients now can be self sustaining, meaning they require only a small amount of supervision. This means that these patients can live in their own facilities but on the premises.
The social makeup of mental healthcare facilities has changed in the last fifty years. If before World War II almost all people were admitted and remained in facilities the situation is very different now. The patients being admitted are all tested for disorders or diseases. Therefore the patients admitted are actually sick and are not being "dumped" by family members or the state. However a new and dangerous trend is on the rise. The increase in violent criminals in mental healthcare facilities. These individuals were sent to facilities due to being ill just like the rest of the patients and could not be sent to a regular prison. However they do not fit in with generally mentally ill people. Their high levels of violence, refusal of medication, and criminal tendencies makes them especially dangerous to mentally ill individuals. While this solution is touted as humane for those sent to mental institutions instead of prisons it makes mental healthcare facilities much more dangerous for both patients and staff.
I would like to conclude this portion of the website with a case study of Northwest Missouri Psychiatric Rehabilitation Center located in St. Joseph Missouri. I visited this facility, walked the grounds and got a chance to understand the day to day activities that go in a modern mental healthcare facility.