The 19th century began with new thoughts concerning what architecture could accomplish for asylum patients. At the beginning of the 19th century new ideas and concepts emerged concerning the treatment of the mentally insane. Before the turn of the 19th century most patients were kept in appalling conditions. At the Hotel Dieu in Paris much like Bethlehem in London were the largest asylums in Europe in the 18th century patients were treated like dangerous animals. Most patients were kept chained to walls. Sleeping conditions were terrible, patients slept on filthy floors covered with straw and shared them with vermin. The calmer patients were crammed together in poorly ventilated rooms with few sanitary facilities. The more violent patients never saw daylight from their dark, musty and cold cells. Notions of therapy were alien to this time period.

However change was in the air. The first wind of change came in the 1790's, A French reformer, Philippe Pinel began to unshackle his patients and give them relative freedom to move around. Reformers and psychiatrists began to develop new methods and ideas toward treatment and healing of the mentally insane. 19th century doctors believed that up to 90% of mentally ill patients could be cured. To achieve these extraordinary goals doctor's agreed on several things, methods of treatment and the role of architecture. What they could not agree on is the definition of insanity or could doctors agree on the causes of insanity. Causes of insanity ranged from physical impacts, especially to the head to a disease of the brain to poor interaction between biological and environmental factors. 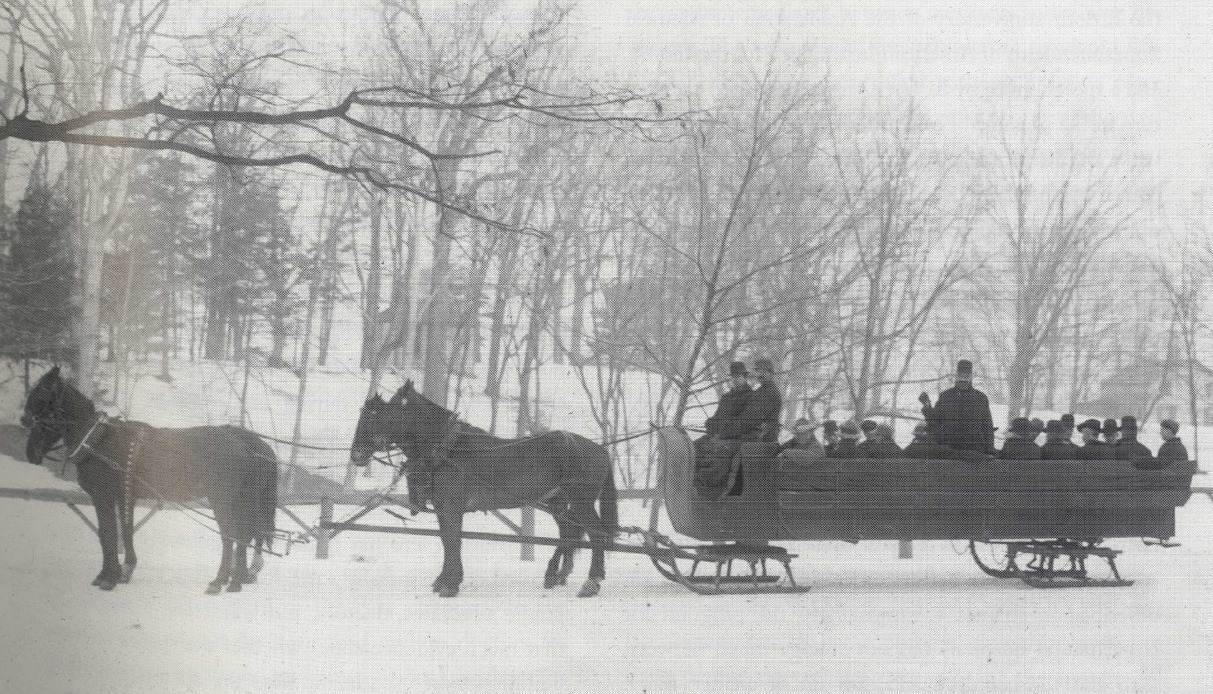 What doctors did agree on is the role architecture could play in helping to cure patients. Doctors believed that patients could only be cured if they were treated in specially designed facilities. The planning of asylums was seen as one of the most important tools a doctor or psychiatrist had at their disposal. Architecture, however, was not the only improvement in the living conditions of the patients. 19th century doctors believed that patients would be cured if they were interned in an atmosphere that resembled the home. Also cleanliness and natural ventilation was sited as important factors to facilitate the healing process. The following improvements were all adopted in 19th century asylums: 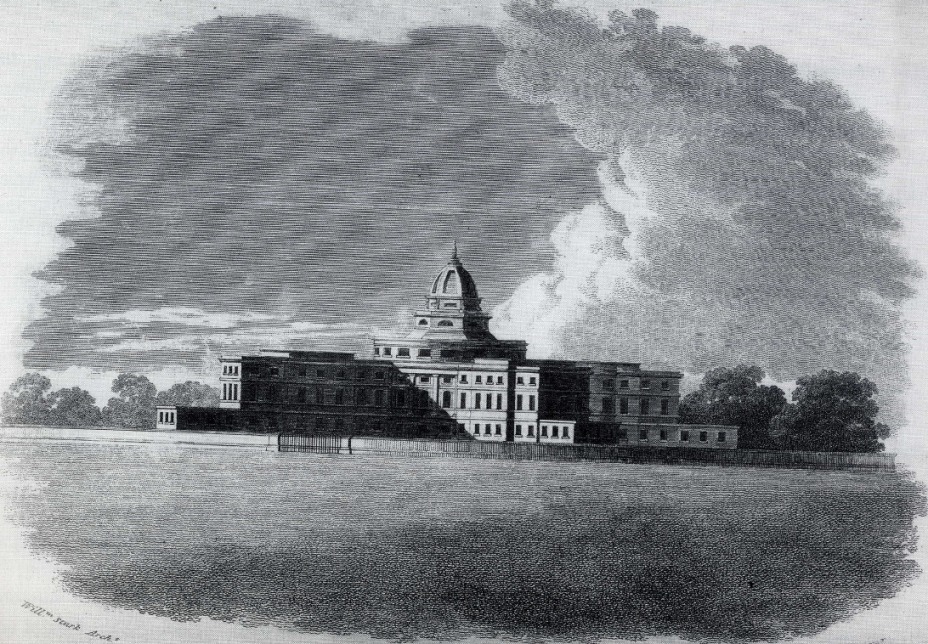 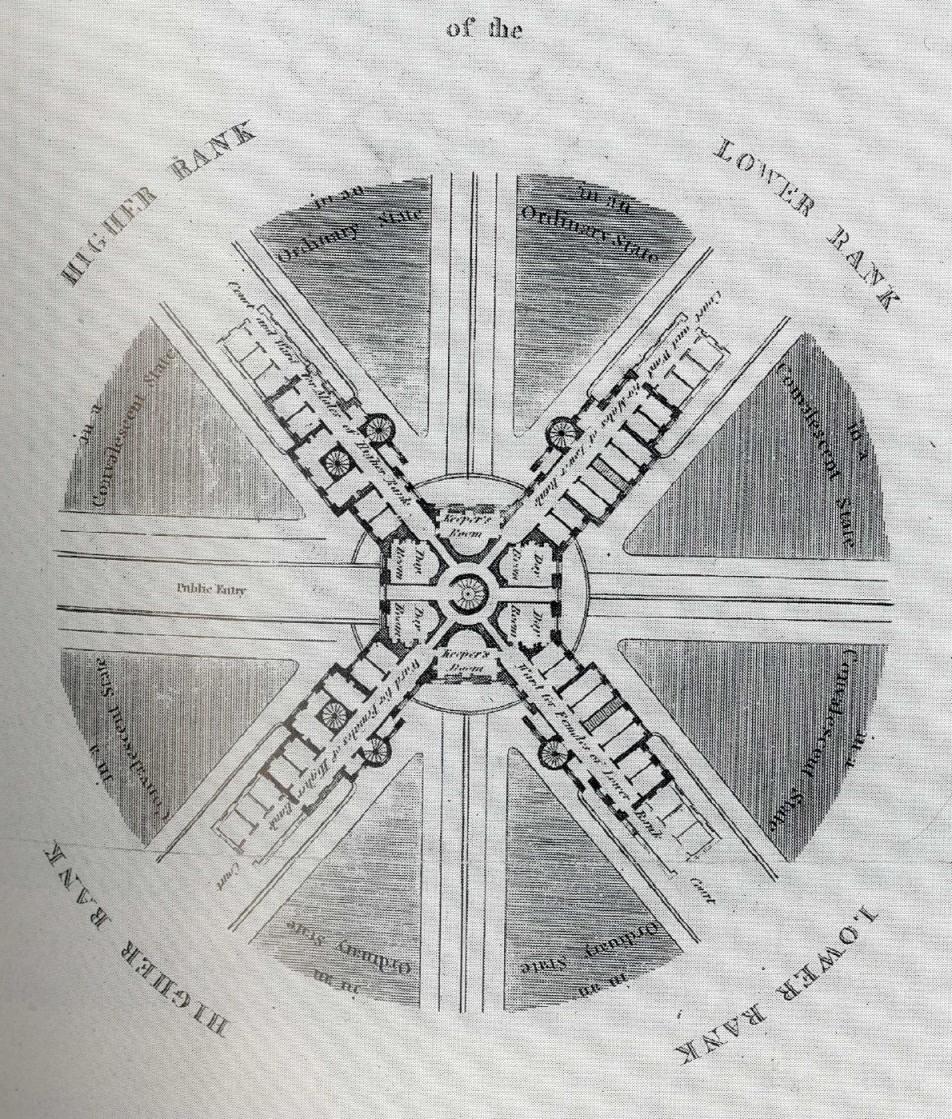 There were over 300 asylums built in America in the 19th century, however their rise was slow. In America Asylum building did not begin until after the Revolutionary War. Before the building of state asylums the insane were kept in alms houses and jails. More often mentally insane people were kept under close supervision at home, sometimes they would wonder town streets like the homeless. Attitudes changed as the American nation developed and state governments flourished. Each state began to assume some responsibility for protecting society from criminals and the insane. Thus the American asylum was born. The first purpose built asylum in the United States was Virginia Public Hospital. 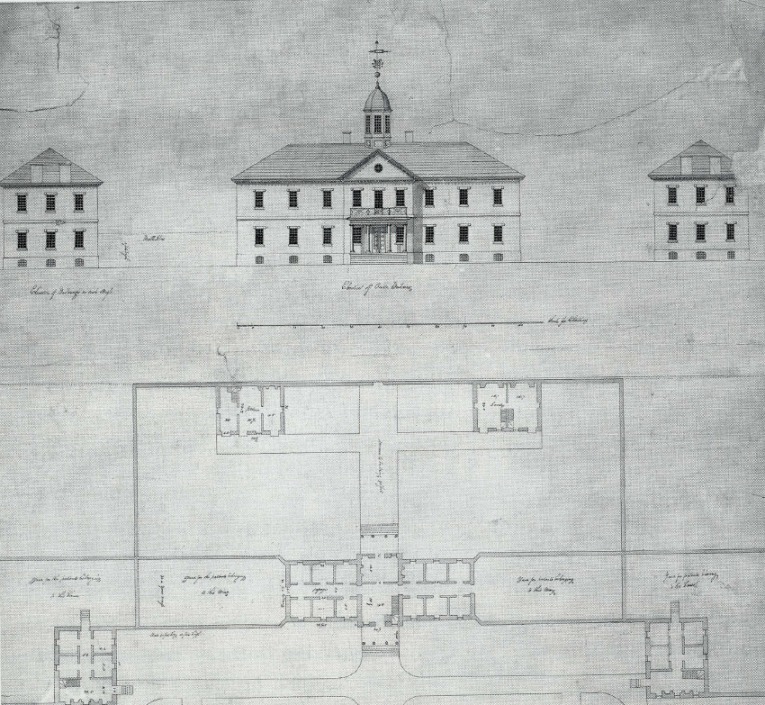 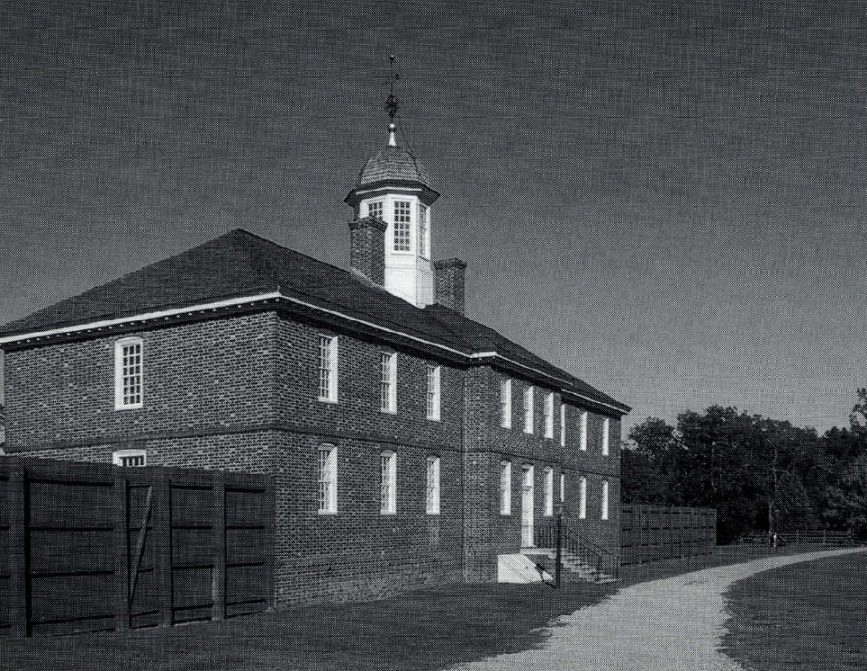 New York State Lunatic Asylum in Utica. Not all early to mid 19th century American asylums were of the Kirkbride plan. The facility at Utica was one such example. Although its planning was not very successful the facility remains standing to this day, it was placed on the National Historic Landmark list in 1989. The 19th century building is no longer in use although several current psychiatric buildings are on site. When it the building was new it experimented with some interesting ideas. 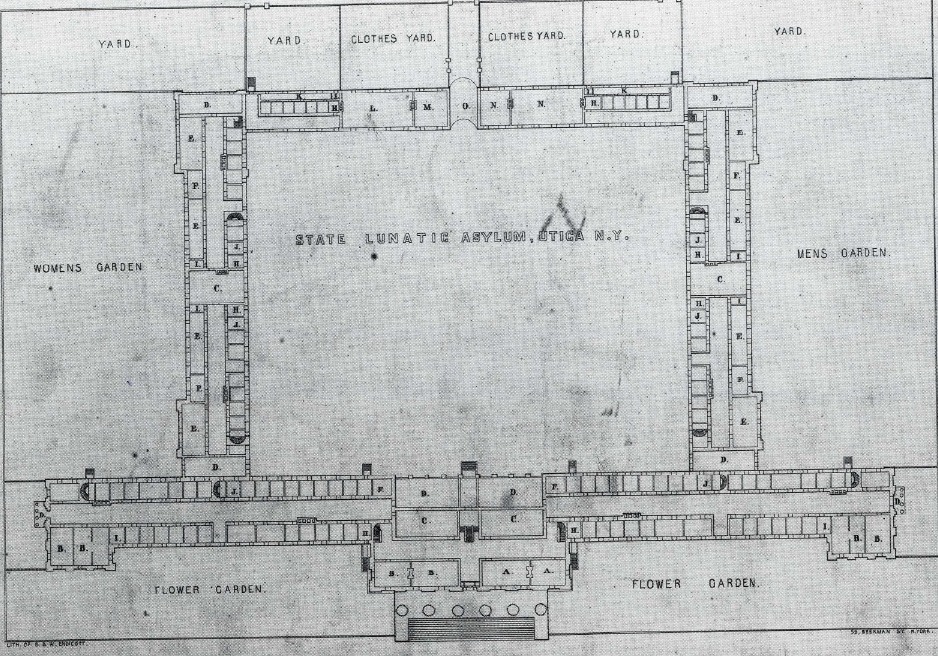 Doctor Thomas Story Kirkbride is the father of one of the most influential designs in the history of mental healthcare
Architecture. For forty years, from approximately 1840 to
1880 Kirkbride was the single most influential man in American Mental Health-care Architecture. Dr. Kirkbride was born in 1809 and got his medical degree in 1832. Dr. Kirkbride's interned at Friends Asylum in Pennsylvania while at Medical School. From 1835 to 1840 Dr. Kirkbrde ran his own practice. In 1840 he accepted a position as superintendent at the new Pennsylvania Hospital for the Insane. In 1844 Dr. Kirkbride helped to found the AMSAII, the precursor of the American Psychiatric Association. However Dr. Kirkbride gained was most notorious for his influential work on asylum design and patient treatment.
Dr. Kirkbride advocated moral treatment of patients. He firmly believed that patients could make could successfully recover if treated in appropriate facilities and followed appropriate regiments. Kirkbride's suggestions regarding asylum design included: 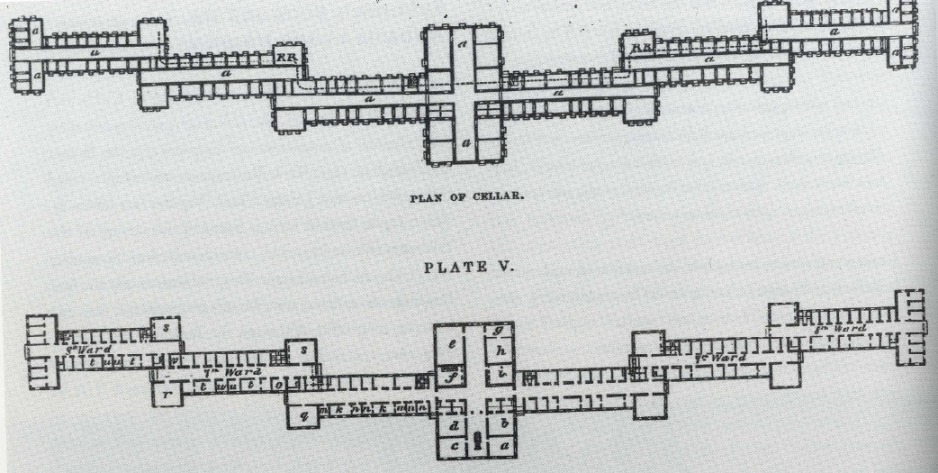 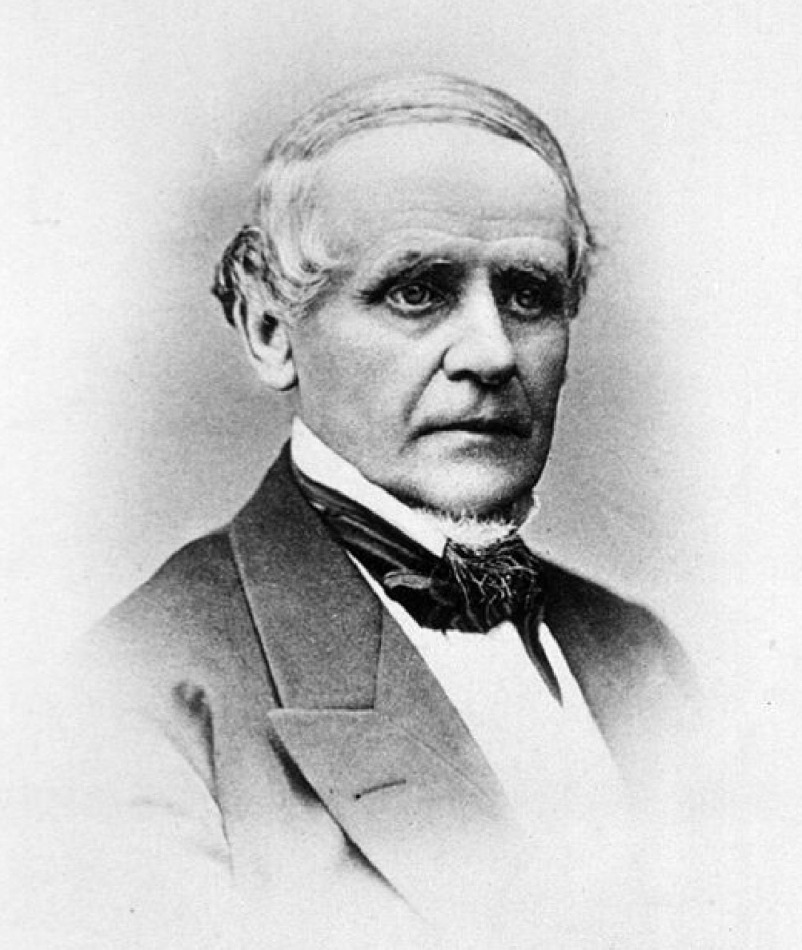 The Kirkbride plan quickly spread throughout America, ironically Kirkbride's own hospital, the Pennsylvania Hospital for the Insane was not of his own planning. The Kirkbride asylum plan was expensive, most of the Kirkbride Asylums were built out of stone, some were built out of stuccoed brick. Many were done in a Greek Revival style, the grand portico's were sources of immense pride for the state that built them. As mentioned before these asylums were technological wonders for their time. These technological advancements were due to Kirkbride's policy of providing patients with fresh water, heat, and air. Dr. Kirkbride was concerned with fire safety, for this reason the buildings were constructed out of stone or brick. The use of double loaded corridors lowered costs and these were generally used, however for the most troublesome patients single loaded corridors were preferred, this made observation much easier. Dr. Kirkbride argued for rural sites for asylums, the scenery was better, patients could work on farms nearby and most importantly escape the hectic everyday life of urban centers. Also important for state governments was the fact that rural site were much cheaper than urban ones. Dr. Kirkbride wrote than whenever possible asylums should be situated on top of a hill to afford excellent views in all directions.

Applications of the Kirkbride Plan

As previously mentioned D. Kirkbride's own hospital was not one of his design strategy. As overcrowding began to affect the Pennsylvania Hospital for the Insane Dr. Kirkbride got the chance to practice the very ideas that he championed. With overcrowding beginning to become a serious concern in the 1850's Dr. Kirkbride successfully lobbied for a new building. This building would incorporate all of his design strategies. The Department for Males incorporated:

While Dr. Kirkbride's own hospital was enlarged in 1859 according to his design strategies it was not the first use of the Kirkbride plan. That honor belongs to the New Jersey State Lunatic Asylum (now Trenton Psychiatric Hospital). The asylum was the first such facility in New Jersey and continued to impress visitors well into the 20t century with its technological wonder and picturesque grounds. However the facility also has a sad and disturbing legacy, starting in 1907 under the supervision of medical director Dr. Henry Cotton many patients were maimed due to removed teeth and body parts. This was done to supposedly rid them of infection that caused their insanity, the practice of pulling perfectly good teeth lasted until 1960. The asylum, however, was an excellent application of the Kirkbride plan. 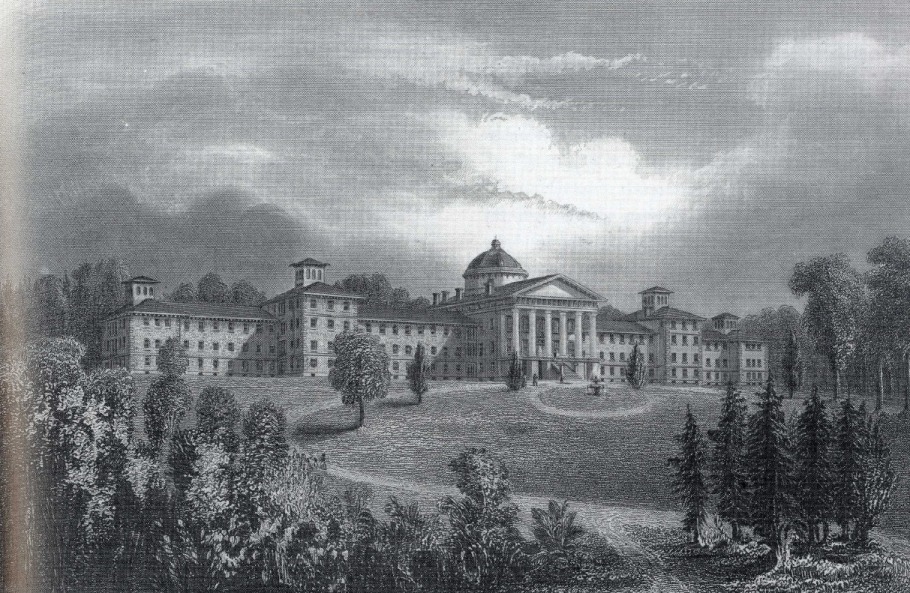 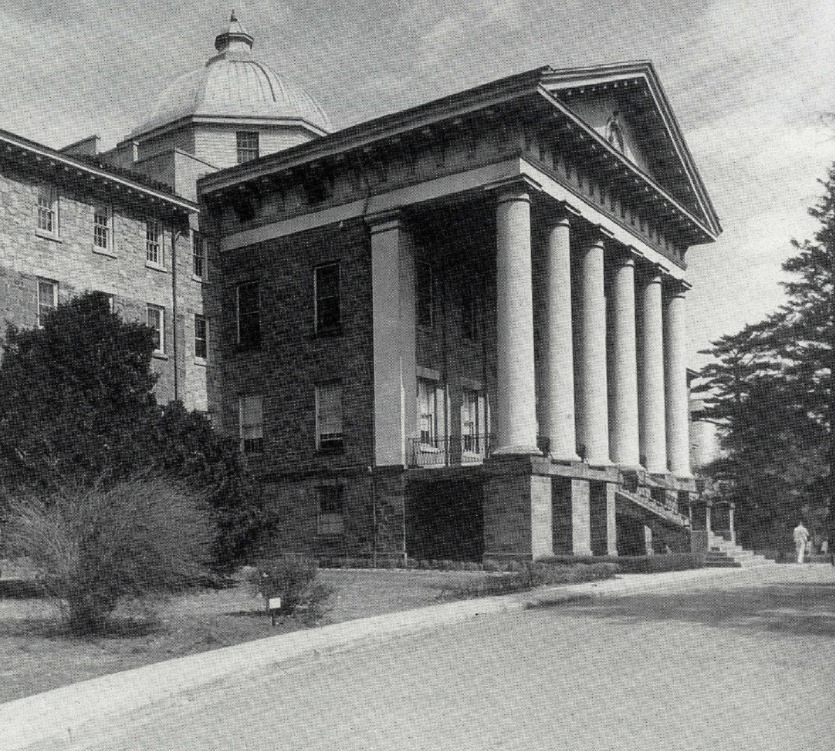 Other Trends in the 19th Century

While the Kirkbride plan had many advantages that could not be denied it also had a one major disadvantage; cost. As stated previously Kirkbride plan asylums were grandiose structures, sources of civic pride for their respective states. Most of these asylum were built out of stone or brick, a very time consuming and expensive process. The state of the art technology that asylums contained was also expensive. Another problem arose during the middle of the 19th century was overcrowding. Most Kirkbride plan asylums were designed for around 250 patients. Soon after the asylums became operational they started to get crowded. The problem lay in the fact that most patients did not get cured as fast as doctors and psychiatrists of the day predicted. The 90% curing rate predicted at the beginning of the century was grossly exaggerated. By the time of the Civil War specialists agreed that some patients were incurable and would have to remain in state care forever. Many asylums needed urgent expansion to contain their rapidly expanding populations. There was debate amongst both facility superintendents and doctors as to how to house patients that would never leave the facility cured.

A new plan was developed to house patients in a much more cost effective manner. The Segregate Plan was a system of non linked buildings that essentially were were one one ward under one roof. This contrasted sharply with the Congregate Plan, or the Kirkbride plan. This plan contained all the wards under one roof. The advantage of the segregate plan was much smaller structures. These could be constructed out of traditional wood frames. The expensive technology needed o provide large asylums with heat and water as well as fireproofing was not needed in smaller cottages that would each contain one ward. Doctors reasoned that the smaller cottages would provide a home like atmosphere much better than a large institutional asylum. These cottages could be arranged along streets that would make up the asylum. 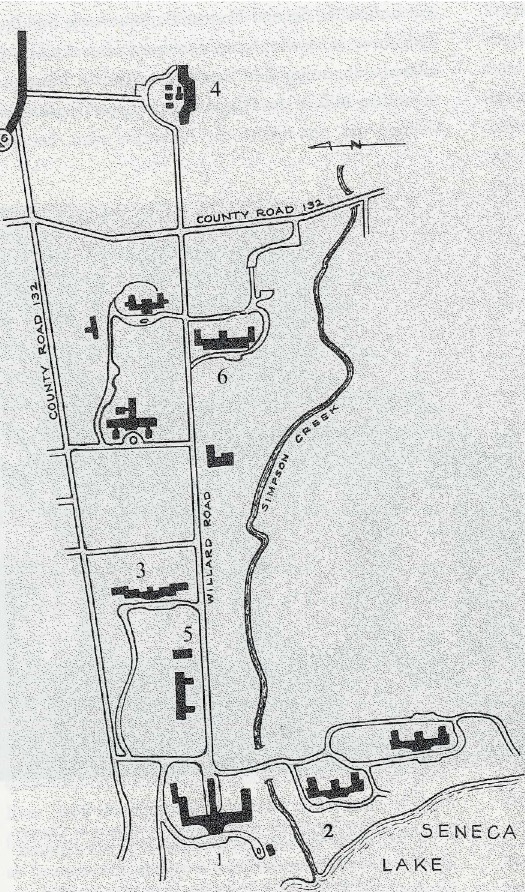 The Willard State Hospital in New York State was one of early segregate plans that recognised the need to house accommodations for the incurable insane. The premise for this facility was the overcrowding of the asylum at Utica described above. The state authorities recognised the need for a facility that would house patients for which there was no hope of a cure and allow the staff of the Utica facility to focus on patients that could be cured. The release rate of patients at Willard was a mere 5%. Unlike most asylums every patient no matter how dire their their condition was seen as equal in the eyes of the staff at Willard. 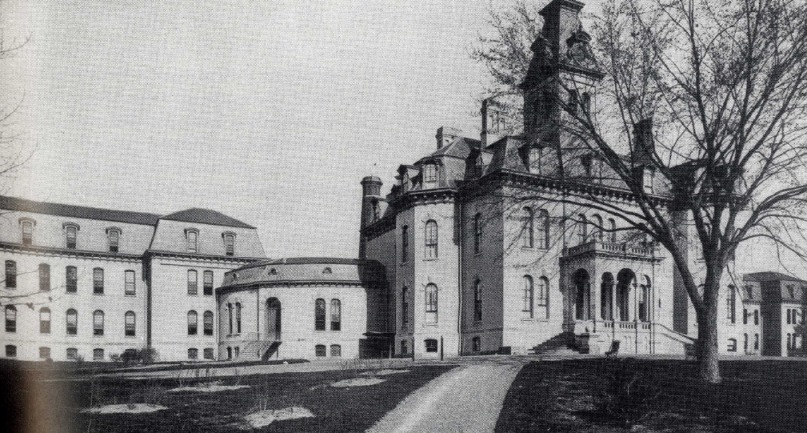 The Illinois Eastern State Hospital is another example of the the segregate plan. This example combined a main facility with cottage additions. The entire campus was constructed to resemble a small city with cottages lining the main streets. The main services were located in separate building located on the campus. The main hospital was used to treat patients that were thought to be curable, the additions were used to house patients that were incurable. The main goal of the facility was to provide a home like atmosphere for the patients while adhering to a limited budget. 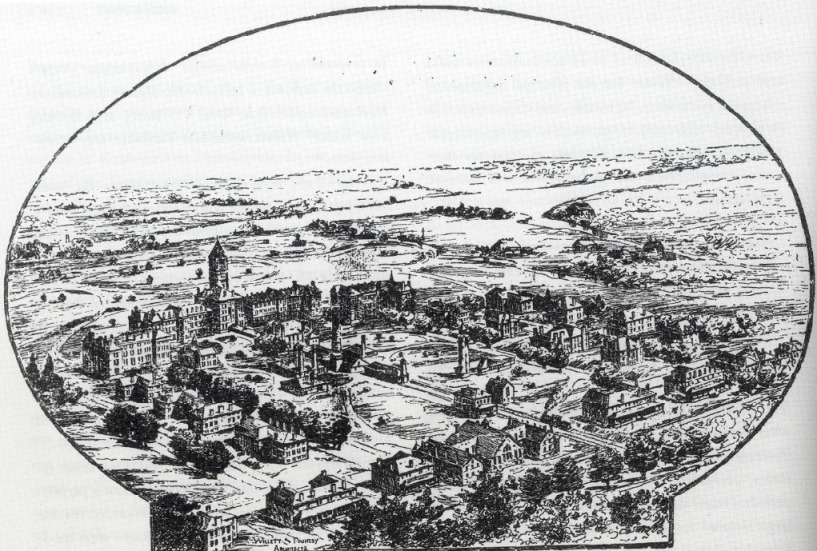 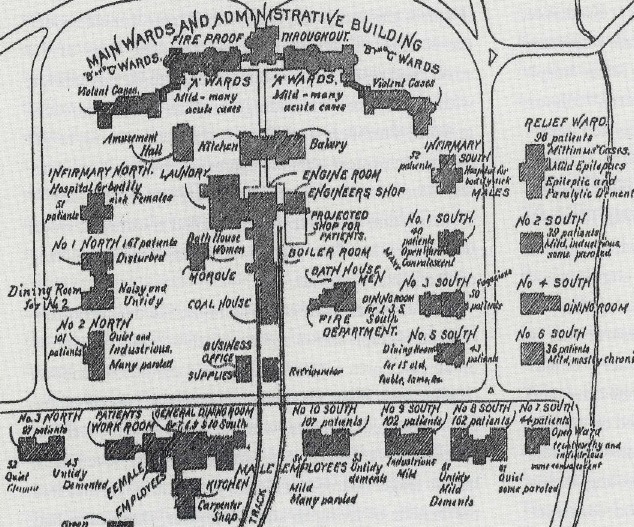 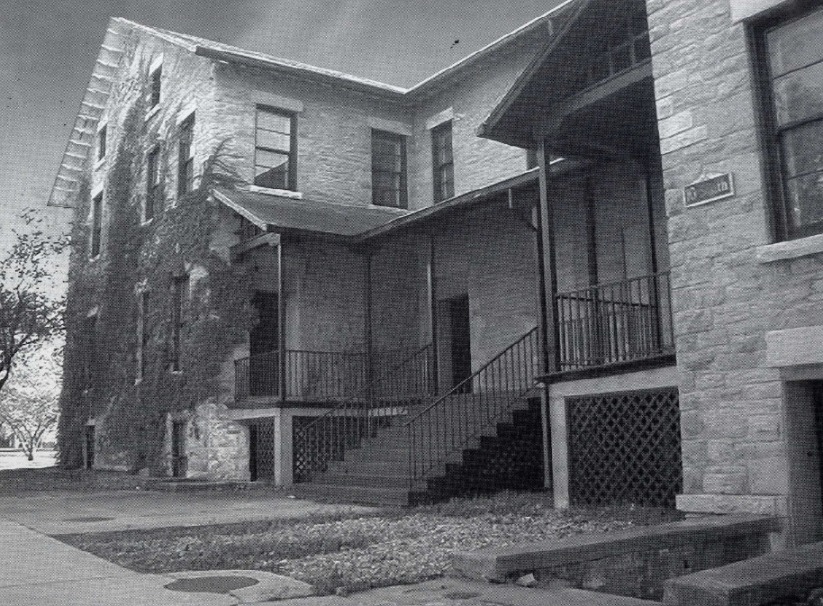 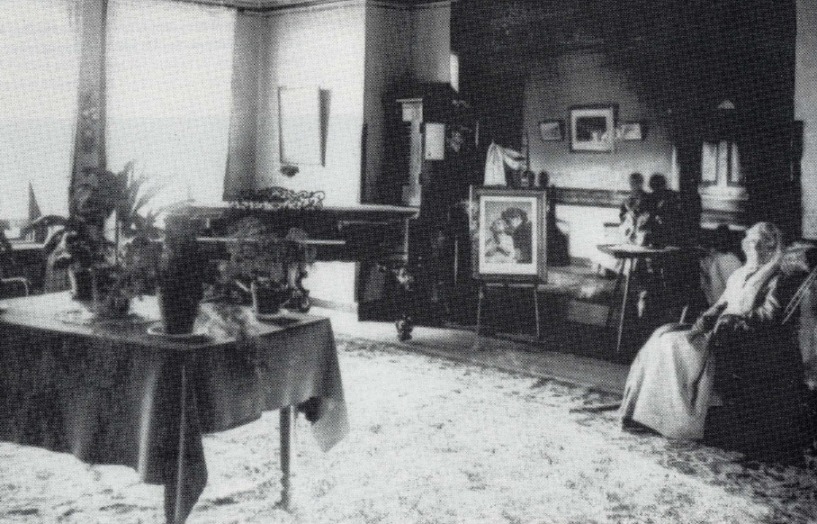